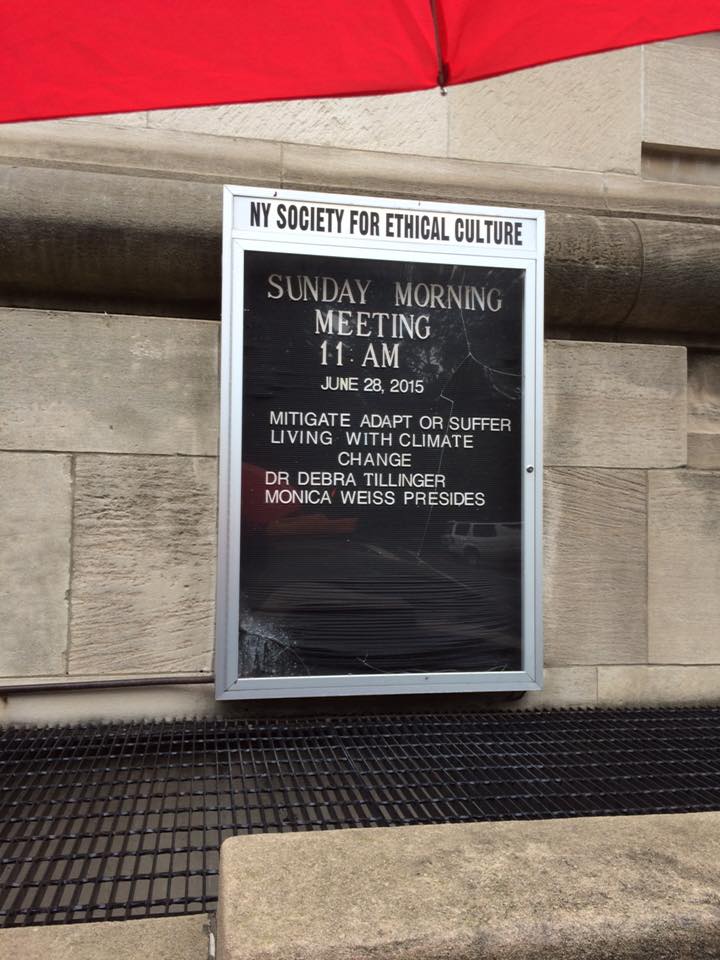 This is my latest offering at the American Museum of Natural History. Any resemblance to the talk given by Dr. Mermaid at the Mermaid Lagoon is purely coincidental. Okay, the topics might be similar, but this will be much more in-depth, and I expect that fewer audience members will be dressed as sea creatures.

In a special one-day offering, Dr. Debra Tillinger will lead an in-depth exploration of the science of the Arctic and Antarctic regions, and how changes in these two critical areas of Earth indicate and catalyze the impacts of climate change. Participants will hear from guest speakers on the geology, biology, and cultures of these beautiful and fragile parts of the world. They will also engage in interactive discussions, take Museum hall tours, and enjoy a challenging game of geopolitics, SMARTIC, in which players must enact real-life solutions to the potential large-scale problems anticipated by the impact of climate change in the polar regions. Refreshments will be served.

This project was made possible in part by the Institute of Museum and Library Services under grant number MA-10-13-0200-13.

What a success! Thanks to everyone who came and made it such a special night.

Thursday, December 4th at 9pm, the Mermaid Lagoon will return for it’s fifth annual visit to NYC. Start getting ready.

Applications are open! Come science with me on the internet. Our Earth’s Future is an online course, produced by the American Museum of Natural History and led by yours truly.

I was writing a bio for an upcoming talk I’m giving (8/23 – I’ll post details when I have them) and I was doing some self-googling for reference. I discovered a review of the very first Mermaid Lagoon and it warmed my cold fishy heart. I LOVE this summary:

The “mermaids” of the lagoon, that is, the performers and staff, presented a broad spectrum of entertainment.  The night’s opening act was Desert Sin, a non-traditional bellydance group in elaborate costume. The performance seemed to interpret the darker power of the sea, intense stares and rippling arms abounded.  Then came a fire-palm dance by burlesque performer Veronica Varlow.  Kai Altair, Varlow’s sister and the MC for the night explained that mermaids are famous for seductive dance and song that lures men to their doom and that this particular one was intended for the BP executives.  Altair herself performed her mystical/tropical music with great warmth and enthusiasm later on that night.  Other entertainment included Cassandra of Lady Circus in a breathtaking glass-walking performance inspired by the Little Mermaid, and Ali Luminescent (Coney Island’s Mermaid of the Year in 2009) on trapeze.  To tickle more academic fancies, a doctor of oceanography gave a lecture both on the ramifications of the oil spill and Japanese dolphin fishing in full mermaid attire.  Among other prizes, love letters from Ms. Varlow and prints of the resident oceanographer’s photography were raffled off as further fundraising. (emphasis added)

That’s me, tickling your academic fancies and providing photos as raffle prizes. And I love the insistence that Kai and Veronica are sisters – which they are, just not biologically.

When I first became Dr. Mermaid, everyone who called me by that name knew where it came from. But now that I’m more of a mermaid-about-town, I realized that I need to explain things. Here’s a diagram that sums it up nicely:

In 2010, I was completing my PhD in ocean and climate physics* and dealing with the stress by bellydancing all the time. I was also working with Kai Altair to create the first annual Mermaid Lagoon, our yearly fundraiser and homage to all things oceanic. It seemed to me that every moment of every day was spent doing physical oceanography, bellydance, or both. I knew that I was about to be upgraded to “doctor,” but didn’t want to lose my sense of self – or my sense of humor – in the title. Hence, Dr. Mermaid.

*I went to grad school at the Lamont Doherty Earth Observatory, which is not a degree-granting institution. From Columbia’s perspective, I was in the earth science department, so that’s what my PhD says. But within Lamont, where everyone is some sort of earth scientist, I was in the division of ocean & climate physics. That’s the most descriptive term, so that’s what I generally use. But my major within the department was physical oceanography.

Want to learn about our earth’s future at one of the most amazing spaces in NYC? Then come join me!

I’ll be teaching two 5-week sessions at the Museum of Natural History. After hours at the museum? Access to brilliant scientific experts in a huge variety of fields? An opportunity to focus on the basic science and the practical applications of climate physics? The chance to finally prove that I’ve outgrown my fear of the blue whale? Oh, it’s on.

Update: here is the official flyer from AMNH.

And what a lagoon it was! We raised money for the Orca Network and Our Spaces with the help of the best performers in New York City. Check it out! Photos by Caroline Alarcon Loor.

Here is our beautiful hostess, Kae Burke, of Lady Circus and House of Yes fame. Sadly, she has been imprisoned by Captain Hook to perform in his Neverland Seaquarium!

And here is Benjamin Cerf as Captain Hook, pitching his Live Mermaid Show. But mermaids, like orcas, do not take well to captivity. 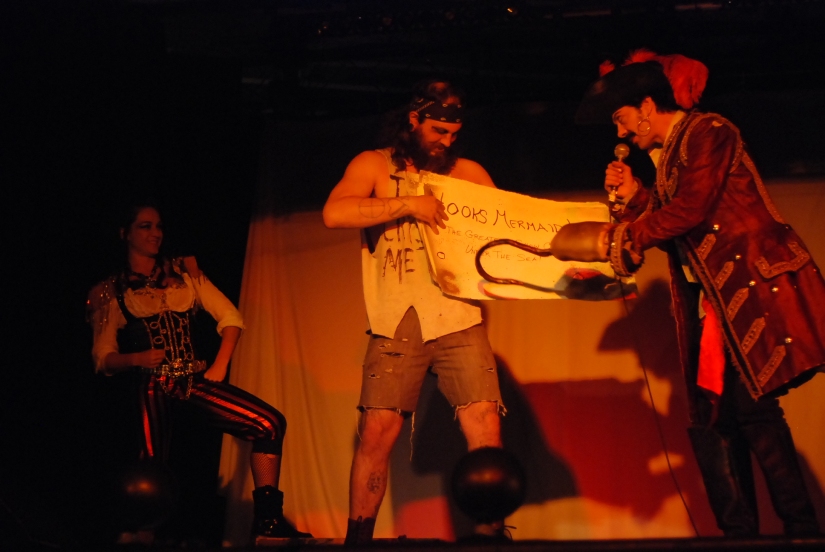 One of Hook’s most popular mermaid performers: Sera Solstice. Visuals by the Glitch Fairy

And the lovely Christine Geiger in an ode to bubbles.

Renata showed the more fluid side of mermaid performance.

Here is Kai Altair, our mermaid leader! We hoped her siren song would distract Hook. 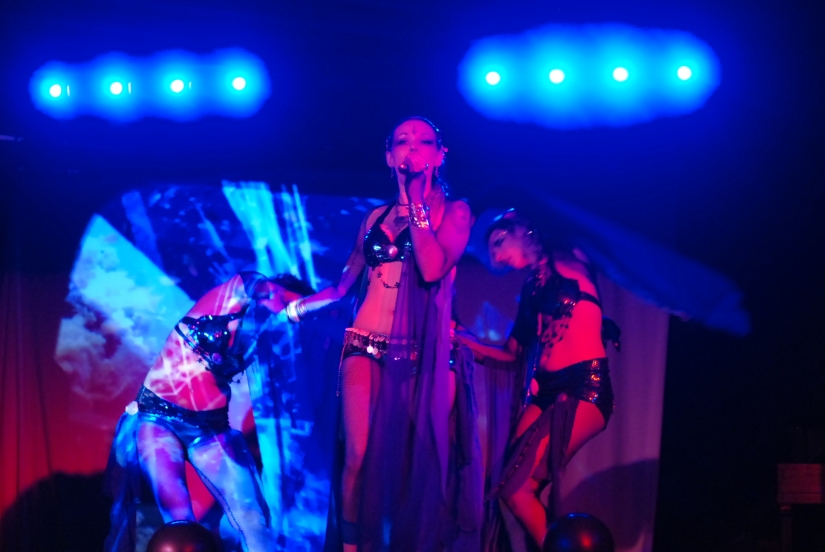 Not to worry, Peter Pan (Anya Sapozhnikova) will save us, just as soon as he rescues Wendy. 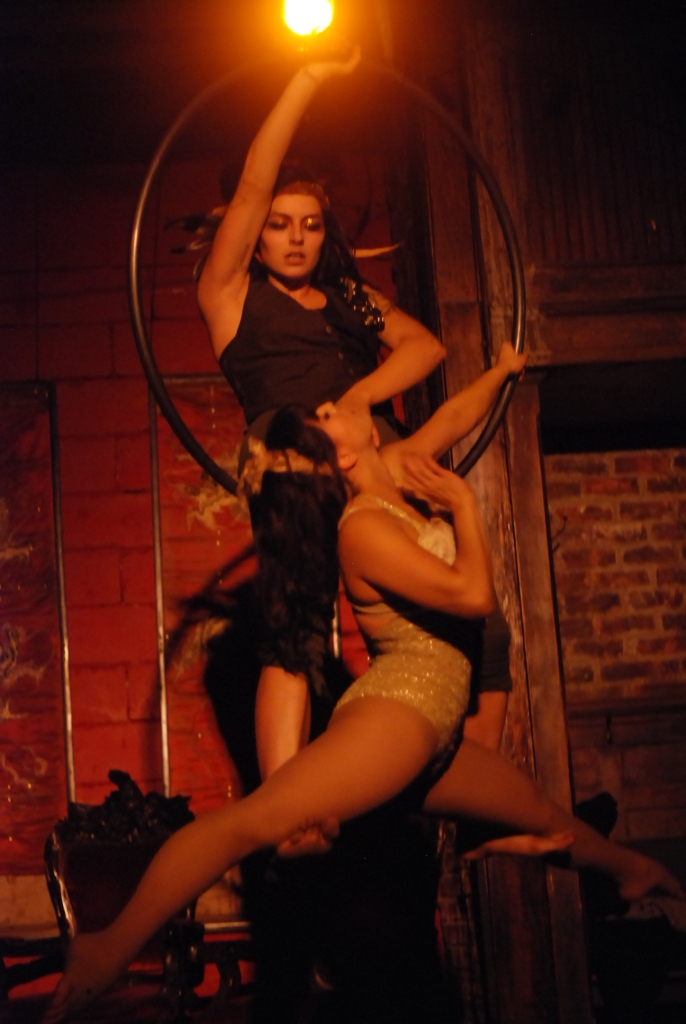 Other residents of Neverland turned out to support the mermaids, including Claire de Luxe as Tiger Lily.

As the most educated among the mermaids, I spoke about the causes we support and the challenges faced by the inhabitants of the ocean – on earth, as well as in Neverland.

And here are a few more people who made the night possible! From the Left: Ali Luminescent, a co-producer and mermaid performer, nightlife legend Guncle, whose karaoke version of the Little Mermaid nearly brought down the house, and Dana Divine, who donated generously to our raffle.

Thanks to everyone for a wonderful night! Thanks especially to Richie Miller who made our logo! You can order this design on a t-shirt or tote by emailing me.

I suppose that I should mention that Occupy Antarctica was a HUGE SUCCESS! Thanks to the lovely and talented Kai Altair, Danielle, everyone at House of Collection, the members of Gypsy Trans Temporalis, and the nice folks at Our Spaces who make Antarctica Day a real thing.

The time traveling gypsies invited us to journey through both space and time to relive the story of Sir Ernest Shackleton’s adventures in Antarctica.

If you’re sad that you missed it, you’ll be even sadder when you see what we gave away at the door:

We danced, we sang, we drank, and we told stories. We learned about Antarctica and considered ways to govern common spaces. All told, an excellent night!